Radiotherapy with Kochi Oxydol‑Radiation Therapy for Unresectable Carcinomas (KORTUC) was developed for the treatment of malignant solid tumors that contain numerous hypoxic cancer cells and/or large quantities of antioxidative enzymes. Hydrogen peroxide is the only agent known to be capable of inactivating antioxidative enzymes and producing oxygen when applied topically to tumor tissues.

As can be seen in Figure 3, KORTUC can inactivate the anti-oxidative enzyme peroxidase in the tumor tissue and oxygen is produced by the degradation of H2O2, partial oxygen pressure is increased, and radicals that are produced in tumor cells by X-ray irradiation are oxidized. Moreover, with the decline in peroxidase activity in tumor cells, H2O2, which is the last product of radicals and ROS, cannot be degraded and thus accumulates in the cell. As a result of this “H2O2 effect”, mitochondrial and lysosomal apoptosis of tumor cells is easily induced following low-LET irradiation in addition to supply oxygen in the hypoxic region. KORTUC converts low-LET radioresistant cells into radiosensitive cells. Therefore, KORTUC could increase

the effectiveness of RT to overcome resistance and to increase efficacy without increasing radiation exposure and side effects to healthy tissue. 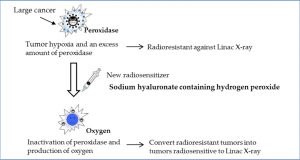 KORTUC has been shown to increase the efficacy of RT in several types of solid tumors regardless of cancer cell types in in vitro and in vivo nonclinical studies.

Furthermore, KORTUC local injection during radiotherapy in > 1,000 patients with various solid tumors (e.g., breast cancer, lung cancer, rectal cancer, esophageal cancer) has been used in the clinical trials in UK and clinical research studies and has been shown to improve the efficacy of RT alone.